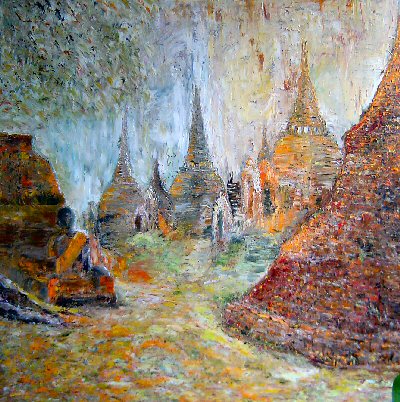 Seen from the south are two of the temple's celebrated three inline chedis. Built in Sri Lankan style, they house the remains of three kings of Ayutthaya: Ramathibodi II (1491-1529, left), his elder brother Boromraja III (1488-1491, right), and his father Boromtrailokat (1448-1488, out of the photo to the right). Located just south of the Royal Palace, Wat Phra Sri Samphet was a royal chapel concerned with the ritual and ceremonial functions of the royal family; it did not have a resident community of monks.

Located 85 km (53 mi) north of Bangkok, Ayutthaya " pronounced "eye-YOU-tee-uh," and romantically named after Rama's legendary city " served as the Thai capital from 1350 to 1767, when it was razed to the ground in an orgy of destruction by Burmese invaders. The city was founded in 1350 by Prince Ramathibodi of U-Thong, on an island formed by the confluence of the Lopburi, Pa Sak, and Chao Phrya rivers. Excellently situated both for defense and for trade, Ayutthaya soon absorbed Sukhothai and expanded into the most powerful military and commercial empire of its time, dominating the old Khmer heartland of central Southeast Asia. At its greatest extent in the 17th century, the city was home to over one million people, conducted diplomatic relations with the France of Louis XIV, and was said to rival in magnificence the cities of Paris, London, and even Venice (see two ancient canals in blue color, running north-south, in the map above). After the sack of 1767, Ayutthaya became a ghost town, its entire populace having been killed, displaced, or shipped off into slavery.